I have used several different kayak carts in the search for one that would actually hold up to the abuse that I put on them while launching in some seriously remote locations where the terrain can be hard enough to walk on much less drag a fully loaded NuCanoe Pursuit behind you without losing my sanity! The ones I have built myself always had the most promise but it became apparently clear that I am no engineer as my designs would eventually break under the load after just a few uses. Carts available that were not so hard on the wallet did great on flat terrain or pavement. Take these on rough terrain however and they just wouldn't work. The biggest problem I would have is keeping the kayak centered on the cart or have it slide completely off from tipping over. No matter how tight I would get the straps it would always slide to a point where they would come loose and I would lose my load. You can imagine the headache of this happening 2-3 times before reaching the water only 50-100 yards away!
Well no more! Problem solved! After all of the advice I ignored due to the high price compared to other carts, I broke down and purchased the C-Tug from Railblaza, At the price of $189.95 with the Sandtrakz wheels, it was a bit more than I really wanted to dish out but after using it a couple of times I realized what a small price it was to pay to maintain my sanity! Im telling you right now....THIS IS THE CART! If you have had the same problems I have described, stop looking. Whip that credit card out of your wallet and order one now! I'm telling you....Put down that burrito, step away from the computer and run down to your local paddle shop and pick one up! If they don't carry them there, start shopping somewhere else that carries the best of the best. The next best thing is not good enough for you my friend! 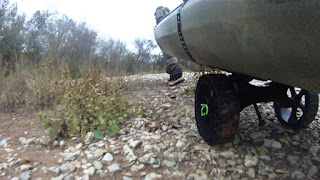 Ok lets start with assembly. I'm sure it came with instructions but I didn't need them. It's simple, stupid simple. The whole thing snaps together in a matter of seconds. The only thing that took a little time to figure out was the strap. I was concerned about there being only one but that would turnout to be a non issue. I have heard negative reviews about the strap and people changing them out after purchase but I'm thinking maybe C-Tug has changed them. That would have to be confirmed but I believe this is the case.
The Sandtrakz wheels on this thing are amazing! Rolling over rock, sand, limbs, roots you name it. I have yet to find anything they will not make it over. The cheaper wheels that the cart can be purchased with at a lower price, $140.00, maybe better on hard flat terrain but when is that the case? The upgraded wheels are worth the extra $50.00 in my opinion.
Now to what keeps your boat from sliding all over this cart. The rubber padding on this cart almost sticks to the hull of the kayak. One strap that is included is plenty to keep the C-Tug under your kayak where it belongs. No more will you have to stop half way to your launch to reposition your boat on the cart or pick up all of its contents after dumping it because the cart slid out of position. No more headaches! Be sure to check out a video review of how this cart handles rough terrain coming soon on my You Tube channel link below. 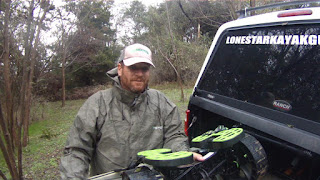 If you are local to the Dallas/Fort Worth area, you can pick yours up at Angler's Pro Tackle or Mariner Sails who are both NuCanoe dealers as well. Links below....