There I am standing in line at the service station where I had stood so many early mornings before when in walks a trio of teens, probably 16-18 years old. I could tell by the half conscious look on their faces that they still had the idea in their heads that it was Friday night. It was in fact 5am Saturday morning and I was in line for what I would like to call an amazing breakfast but was in reality a 16 oz can of Red Bull and a sausage biscuit that was just good enough that I could choke it down before beginning my 8-10 hr journey down the Brazos River. My suspicions were confirmed when one said to the two others "don't let me forget, I have to pick up my sister in the morning." "Dude, it is the morning!" was the reply from his pal. I couldn't help but giggle a little knowing how many times I had been in a similar situation as a teen and young adult.
This got me to thinking about how drastically my life had changed in recent years. I had gone from seeing the sunrise in a drunken haze to seeing it greet the world with a clear mind and the ability to actually enjoy the coming of a new day. Not that I regret any of those not so clear mornings. It was just a wilder time in my life I suppose. I had rediscovered something now that I had once dearly loved but somehow I had drifted away from it over the years. I had always loved fishing and the outdoors as a child but had forgotten just how important it was to me. Now that I have found it again, it drives me!
I could only hope that one day these three young men would awaken from their own drunken slumber and discover what drives them. I guess that is their path and story to tell so I left it at that and didn't bother to share any of my wisdom with them...
Paddling down the river that morning, watching the sun break the horizon, I couldn't help but think that I too had an awakening that morning. 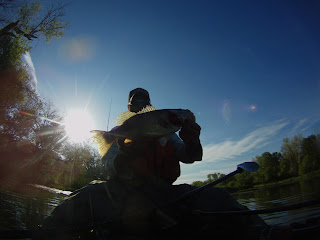 Growing up, we didn't have a lot of material things. The video games and electronics that kids have today were only dreams in a designers head at the time. What we had to occupy our time was the great outdoors. Any given Saturday morning I could be found running the creek beds with one or many of the local neighborhood kids in search of craw fish, turtles or anything else that lived in that muddy water.

Sundays however were a bit different. Though my family wasn't wealthy by any means, we did have one   thing in the drive way that the other families in the neighborhood survived without. Dad had a bass boat. Come 5am on most Sunday mornings, we had already filled our stomachs with scrambled egg sandwiches, had a lunch packed along with some cold sodas and were headed toward one of our local water holes to test our skills at tempting a few of the resident bucket mouths to take a ride back home with us in the live well. This was well before the idea of catch and release had caught on and we ate our catch.